Dementia dogs give back some of what Dementia takes away

Dementia dogs give back some of what Dementia takes away

Alzheimer’s disease is the most common form of dementia.

Alzheimer’s disease not only negatively affects memory, thinking and performing everyday tasks. It can cause confusion and communication difficulties, including speech for the person with the condition.

This video demonstrates how wonderful these dogs can recognise if their owner is angry, frustrated or upset. The Dementia Dog will get a toy from his basket to make its master / owner feel better. The video also shows a woman who had lost her capabilities to talk and since the dog’s arrival, she started speaking again.

In the United Kingdom – particularly in Scotland, dogs are being trained as Dementia Dogs. They are specifically trained in tasks that support people with dementia. Thus giving support to the person with the condition, as well as their entire family and the main carer.

According to their trainer, the greatest benefit is a reduction in anxiety, the reassurance and the positive focus the dog gives to people living with a dementia.

The future looks bright for the potential benefits of dogs specifically trained to assist with a range of dementia conditions. Continuing research will provide people living with a dementia, an increase in independence and a more fulfilled lifestyle.

Some of the comments from people who have Dementia Dogs:

How has your dog, Alex helped since he arrived?

“He’s made an absolutely tremendous difference.”

“He calms my husband down and he’s had a calming effect on me as well.”

“It’s been a wonderful change. Things are a lot calmer and it’s all down to him.”

What tasks has Alex done, that you have found most useful?

“He works to a bell or my commands. In the morning, he’ll come and find Alex’s pills and give them to him. When we went to my daughter’s at Christmas, he still found them no bother in a different environment.”

These clever and delightful dogs are making a really positive impact on the well-being of family, in addition to those who have a dementia.

Dementia is a disease that doesn’t go away. If you are struggling with it yourself or you are caring for someone who has the condition, you’re not alone. Reach out for help – Daughterly Care, we’re always there. Ring us on (02) 9970 3333. 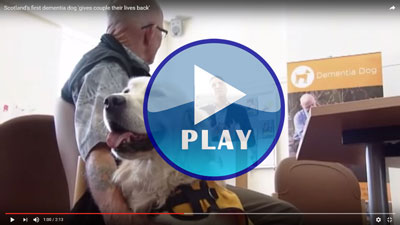